What is the Candace and Kids Grits and Grinds Goats Milk Soap? 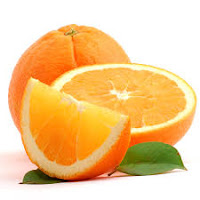 Candace and Kids Grits and Grinds Goats Milk Soap is a wonderful mixture of  grits, coffee grinds and pumice. This combination assists in removing dirt, grease and grime, while orange oil reduces any odor. Therapeutic Fuller's Earth Clay aids in healing the skin. A moisturizing soap for mechanics, campers, fishermen, and the kitchen. 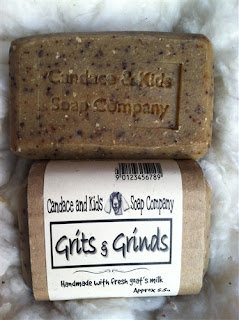 Why coffee grinds/coffee grounds? Did you know that using coffee grounds/ grinds on your complexion and skin can remove dead skin and act as a exfoliant??

Why orange oil? Orange Oil is wonderful in assisting with acne, skin tone and skin texture. Mix all this together with goats milk soap and you have a wonderful natural soap that is beneficial to any person with skin issues or conditions like acne, irritated skin or dry skin.

This Grits and Grinds goats milk soap is great for the outdoor man who deals with their hands having an odor from hunting or fishing. A wonderful deoderizor.

Check out on our best sellers for Candace and Kids and let us know what YOU think.


Posted by Candace and Kids Soap Company at 6:30 PM No comments:

Citrus and Salt Goats Milk Soap and the benefits of Himalayan Salt! 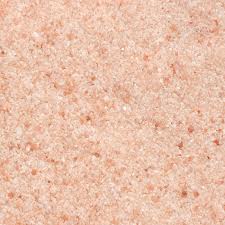 If you are like other consumers, you are unsure exactly what Himalayan Salt is and why it is so good for your health in so many ways.

Himalayan salt can help aid in so many skin issues and skin conditions.  A skin condition that many suffer from is acne. Himalayan Salt works on acne by drawing out toxins in your skin. The toxins are trapped under your skin and that is why many people suffer from skin breakouts and severe acne. Using Himalayan Salt is great for your skin - whether you use it on your face with Candace and Kids Citrus and Salt Goats Milk Soap or whether you use it on your body as you shower.  It works by drawing out toxins. 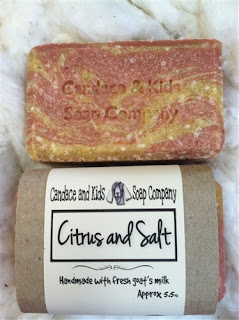 Posted by Candace and Kids Soap Company at 7:00 PM No comments:

Our winner of the "Name that scent" contest! Her Story... 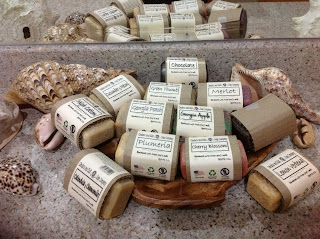 My name is Iries Kristine Salem, I'm 27 years old and I work as a licensed Physical Therapist. I have been diagnosed with Eczema in 2007 and with my line of work i have to always wash my hands which leaves my skin dry and itchy. It has been hard to find bath and skin care products that could control and soothe my skin condition.

By researching, I found out that Goats Milk Soap has natural glycerine content that naturally matches human skin therefore it's good for skin conditions like eczema conditions, psoriasis etc. 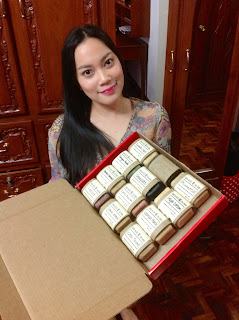 I saw Candace and Kids Soap company by searching the web for soaps that are good for skin conditions and signed up in the newsletter. Candace and Kids Soap Company had announced that they would have a contest to name the new baby powder scent soap, I submitted 13 names and GIGGLES was one of them. I literally jumped for joy when I found out that I had won the soap for a year contest!!! Upon opening the box, I was so amazed that it smells true to the scent and not fake. I have been using the Goat milk Soap for the past 3 weeks now, and I am especially liking the Calendula and Chamomile Goats milk soap. It leaves my skin smelling so fantastic and I noticed that my skin feels softer and smoother and has more moisture and I only have to put little lotion after. I bring the High Cotton Goats Milk Soap to work so when I need to wash my hands they wouldn't be so dry.

The scent of these soaps are totally awesome. All in all, Candace and Kids Goats Milk Soaps improved my skin and I'm looking forward to each coming month when i can try the rest of the soaps!

Do you know about Sea Island, Ga? 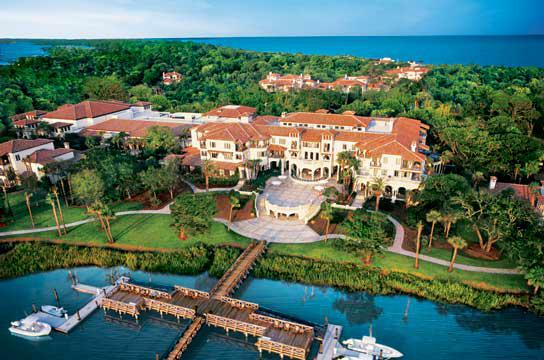 On the Southern Coast of Georgia is one of the most hidden secrets of the Georgia Coast. If you don't know about Sea Island, you are missing something wonderful!


In 1911 Howard Coffin (Vice President of the Hudson Motor Co) bought 20,000 acres of land on Sapelo Island and began his developing of this beautiful piece of land. In 1926 Coffin then purchased more land which was called Long Island and named it Sea Island. From that point on he built a golf course, "The Plantation" and he opened a Inn and Lodge named "The Cloister" and at that point, Sea Island was born.

Sea Island, Georgia is known for it's beautiful beach, relaxation of highly social people. Access to Sea Island now is limited, therefore Candace and Kids created a goat's milk soap to smell like the Georgia beach named  - Sea Island. This private barrier island is home to many. 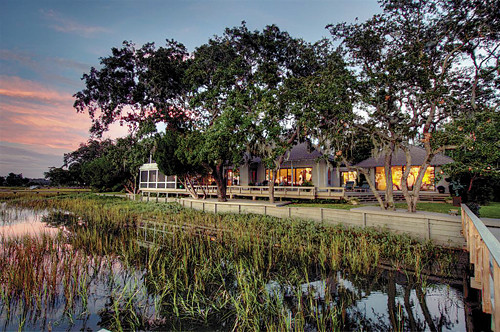 If you would like to visit Sea Island, go ahead and get Candace and Kid's Sea Island Goat's Milk Soap - it may be the only way you can smell the wonderful sea smell of Sea Island. A moisturizing goat's milk soap with a clean and refreshing sea breeze scent - just like Sea Island, Ga.

Pin with Candace and Kids!